For those of you who still are on this blog, hoping for it to be updated,

I have a new blog now. It is currently mainly video game reviews, but it doesn't have to be that only. I'll do whatever and it would be cool to see some of the former readers seeing the new blog.

The blog is called - This Is A Blog, Do You Like It?
It can be found at this URL.

The Quest: A Review 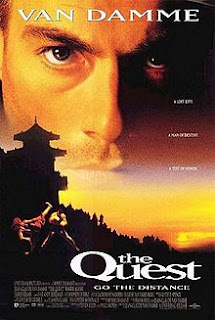 Hello and welcome to my review of The Quest. Now, this is a Jean-Claude Van Damme film so you probably don't expect me to be talking much about a story, just about how flashy the fighting was. Well, you're wrong. This movie, unlike other fighting movies, had boring half hours of just talking segments dispersed throughout the movie. Well, o.k. maybe he wasn't going purely for an action flick and wanted to drive the film with a story. Well he failed in that sense too. So, this movie is an action movie, with not enough action, and a bad plot. The only saving grace is watching stereotypical fighters from countries like, "Siam", China, Japan, Turkey, Mongolia, Germany, Brazil, Ireland and Africa, oh, you say Africa is not a country, well to JCVD it is. The basic plot is this guy, whose name, personality, favorite color, romance or any distinguishing features are unimportant (played by JCVD) is chosen to fight in this sacred Tibetan fighting tournament where other fighters from around the world fight him. While he is fighting, a sailor guy (Roger Moore) steals the prize: a golden dragon statue.

So over all, this is a fighting movie, lacking fighting and a half decent story, with geographical inaccuracies and other things that make this one that should be watched with a campy mindset. 5/10 or if you breathe off of triple aerial spin kicks (JCVD fan) 9/10
Posted by Ezra at 11:46 AM No comments:

Hello there, welcome to my review of Team America: World Police. From the creators of South Park - Trey Parker and Matt Stone is this film centering on this gun rearing, reckless, ultra patriotic anti terrorist organization. Team America must save the world from Kim-Jong-Il's evil plan to use WMD's to blow up major areas in the world. The Team must recruit broadway actor Gary Johnston to help with insuring that Kim-Jong-Il doesn't succeed. This movie has many songs parodying action movies and patriotism. This movie is altogether like South Park mixed with Thunderbirds. AMERICA FUCK YEAH!
Posted by Ezra at 6:51 PM No comments:

The Hobbit: An Unexpected Journey: A Review

Hello there, welcome to my review of The Hobbit: An Unexpected Journey. This movie is awful. I've seen other reviews forgiving this movie for its wrongs. Nope, this movie was just plain bad. Hollywood nowadays, I feel, just has a notepad filled with stupid, overused cliches. This movie used 'em all. From cliched characters, to slapstick comedy, to stupid oneliners, to a overused speech about heros and crap, to a corny villain that didn't even appear in the book. It is okay to stray from the book a little, but not to fill the holes with overused shit. The story itself was pretty true to the book, about the band of dwarves on a quest to take back there riches. Now, they didn't have much to work with, but this would have been a fine kids movie. If you made it one movie, not 3 hours long, taken out the awful comedy it would have been a good kids movie. But no, not serious enough, let's add something that wasn't in the book for comic relief. Radagast the Brown played a small role in the first LOTR book, he was never in the hobbit. I am just angered by this monstrosity. It itself wasn't that bad, but to take a crap on something I enjoy (the LOTR books and movies) is just awful. You have FAILED Peter Jackson. You have officially made The Phantom Menace of Middle Earth. 2/10!
Posted by Ezra at 12:57 PM 1 comment: 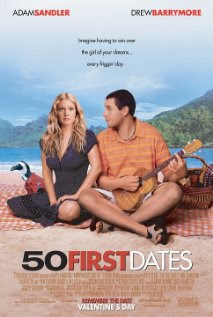 Hello there, welcome to my review of 50 First Dates. Now, you might be thinking, why are you watching awful Adam Sandler movies, well the answer is they're funny. Not in the way they're supposed to be though. They are funnily bad. I have watched a bunch of these movies and will be writing bad reviews of them. So, the story is - the Adam Sandler character   meets this girl at a cafe. She has some form of Amnesia that makes her relive the same day every day for the past year. Adam Sandler really likes her( by the way she's played by Drew Barrymore) but she can't recognize him each day. He then makes her a tape so she can remember all the stuff she missed et cetera. Anyway, my main problem, besides the story and everything else about this movie is that the Dad of the girl, remakes the day everyday. What I mean is he tries to make it seem like the same day everyday. This would take a lot of money and be impossible to do everyday and why don't they just break the news to her?
It is just as cliched as you'd expect from Sandler and the only somewhat good thing is that the actor who was Samwise Gamgee in the Lord of the Rings movies is in this. Or is that bad? Now for the verdict. 10 is the worst and 1 is the best. This movie scores 7.4 on the badness scale. I'm sure there are worse things, but this one is pretty bad.

What is your favorite feature on the blog